Since 2005, many of Silicon Valley’s largest corporations – including Google, Facebook, and Apple – have operated private commuter shuttles between their corporate campuses in the South Bay and cities throughout the Bay Area. San Francisco alone is home to approximately 400 private shuttle stops that serve 35,000 passengers daily. Their impact on housing is clear: a recent study demonstrated that nearly 70% of no-fault evictions between 2011 and 2013 occurred within 4 blocks of these stops. Similar studies have correlated disproportionate rent increases in neighborhoods served by shuttles, many of which have been historically been home to low-income and otherwise marginalized communities. The private double-decker buses, which feature luxury amenities like plush seats and wireless Internet, are thus more than just a symbol of growing inequality in San Francisco, and have sparked numerous debates and protests.

The shuttle stops also serve as a stage for everyday public spectacle, showcasing a common scene in which groups of people stand “alone together,” each interacting exclusively with their electronics. Such activity marks a shift in the role of urban space, in which sidewalks and other common spaces are less a site for creative encounter with diverse publics and more a platform for private work and consumption. Similarly, individuals who were once citizens are now users. In this context, the distraction afforded by personal devices can be understood not only as a social issue of lost intimacy, but more importantly in terms of its economic and political consequences. What is most interesting is that the shuttle riders themselves create many of the products—mobile devices, social media sites, productivity apps, and games—that fuel this disengagement from the vitality and sustainability of urban communities. Neither the networks of the buses nor the corporate Internet are neutral.

d0ntb33vil is a conceptual intervention that temporarily disrupts these activities by exploiting the shuttles’ and riders’ own wireless networking technologies. Modified wireless routers (running a customized version of the free/mostly-open-source Tomato firmware) placed near stops mimic the network names and passwords of the buses themselves, such as Google’s “GBUS.” (The title of the piece is taken from Google’s infamous slogan, which is also their wifi password.) Riders whose phones are set to remember known networks will automatically connect; others may manually connect under the assumption that the service has been extended to the stops themselves for their benefit. However, rather than obtaining open access to the Internet, users are redirected and restricted to a looped video of the sidewalk—shot on location at each bus stop—that mimics the position and angle at which most hold their phones. The sidewalk image is both indeterminate and quite specific: on the one hand, it is a clear symbol of failure in an otherwise highly-customized and efficiently cybernetic system; on the other, it highlights the particularity of a given space and gestures toward the consequences of replacing lived environments with purely virtual worlds. Harris David Harris is a media artist whose work examines the political economies and personal practices surrounding emerging technologies, particularly in the contexts of neoliberalism and gay assimilation. Harris also draws on several years of performance as a drag queen—where as alter-ego Lil Miss Hot Mess, she has performed in venues ranging from gay bars to universities, SFMOMA to the streets of OccupySF—to extend that tradition’s critical aesthetics of irony, camp, and failure to new forms and questions. Harris holds an MFA in Digital Arts & New Media from UC Santa Cruz and a BA in Sociology/Anthropology and Film & Media Studies from Swarthmore College. 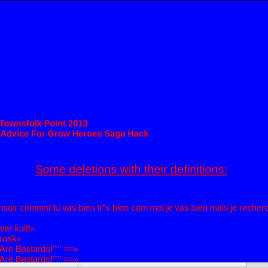 Wayne Clements 'no.wiktionary' has two aspects. It is a list of deleted words with user definitions from the deletion log of http://no.wiktionary.org/wiki/Forside. It is also a live check and print t...

Maria Colina Perez I would describe my method of video manipulation as a sadistic one, that is how I prefer to react on media aggression.TV and Internet both overloading viewers with information and ...