ScareMail is a web browser extension that makes email “scary” in order to disrupt NSA surveillance. Extending Google’s Gmail, the work adds to every new email’s signature an algorithmically generated narrative containing a collection of probable NSA search terms. This “story” acts as a trap for NSA programs like PRISM and XKeyscore, forcing them to look at nonsense. Each email’s story is unique in an attempt to avoid automated filtering by NSA search systems.

One of the strategies used by the NSA’s email surveillance programs is the detection of predetermined keywords. Large collections of words have thus become codified as something to fear, as an indicator of intent. The result is a governmental surveillance machine run amok, algorithmically collecting and searching our digital communications in a futile effort to predict behaviors based on words in emails.

By filling all email with “scary” words, ScareMail proposes to disrupt NSA search algorithms by overwhelming them with too many results. Searching is about finding the needles in haystacks. If every email contains the word “plot,” or “facility,” for example, then searching for those words becomes a fruitless exercise. A search that returns everything is a search that returns nothing of use. Benjamin Grosser creates interactive experiences, machines, and systems that explore the cultural, social, and political implications of software. His works have been featured in Wired, The Atlantic, The Guardian, the Los Angeles Times, Creative Applications Network, Neural, Rhizome, Hyperallergic, Corriere della Sera, El País, Der Spiegel, Al Jazeera, and The New Aesthetic. The Huffington Post said of his Interactive Robotic Painting Machine that “Grosser may have unknowingly birthed the apocalypse.” The Chicago Tribune called him the “unrivaled king of ominous gibberish.” Recent exhibition venues include Eyebeam in New York, The White Building in London, Boston Cyberarts Gallery in Boston, the Telecom Italia Future Centre in Venice, and the Northwest Film Forum in Seattle. Grosser’s recognitions include awards from Terminal and Creative Divergents. He holds an MFA in new media and an MM in music composition from the University of Illinois at Urbana-Champaign, where he teaches in the School of Art & Design. 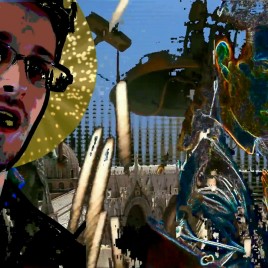 Do Americans Dream of Being Electric Sheep? 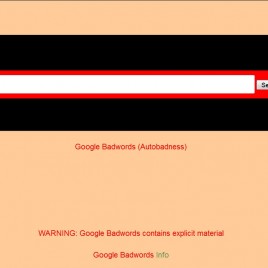 Wayne Clements Google searches have a built-in autocomplete facility. If you enter a word, Google will offer search suggestions to save you time typing. Some words Google will not auto-complete....