8-Bit Mixtape started from a fun session of Budi Prakosa, Andreas Siagian and Marc Dusseiller exploring the possibility of using BabyGnusbuino, a simple microcontroller that was developed by Anyma. The idea was to create a synthesizer from an affordable programmable chip that is playful and could be used by anyone to play the music. 8-Bit Mixtape is using a mathematical expression into a single line of programming code which generates Algorithmic symphonies. A different patern in both in audio and visual are generated from the mathematical expressions that were used. Sakarias Lehtomäen (FI) known as Viznut posted about the algorithmic symphonies from single line of code and soon many people even without scientific background came up with their formula and share it through the internet. 8-Bit Mixtape took some of the track generated from these formulas and enhance it by giving some variables that could be controlled by the user. 8Bitmixtape version 0.9 is a continuation of the 0.8 version, in this version, Budi Prakosa and Adhari Donora collaborate to make it easier for beginners to assemble the synthesizer.

Marc Dusseiller
Switzerland
Dr. Marc R. Dusseiller is a transdisciplinary scholar, lecturer for micro- and nanotechnology, cultural facilitator and artist. He works in an integral way to combine science, art and education. He performs DIY (do-it-yourself) workshops in lo-fi electronics, hardware hacking, microscopy, music and robotics. He was co-organizing Dock18, Room for Mediacultures, diy* festival (Zürich, Switzerland), KIBLIX 2011 (Maribor, Slovenia), workshops for artists, schools and children as the former president (2008-12) of the Swiss Mechatronic Art Society, SGMK. In collaboration with Kapelica Gallery, he has started the BioTehna Lab in Ljubljana (2012 – 2013), an open platform for interdisciplinary and artistic research on life sciences. Currently, he is developing means to perform bio- and nanotechnology research and dissemination (Hackteria | Open Source Biological Art) in a DIY fashion in kitchens, ateliers and in developing countries. He was the co­organizer of the different editions of HackteriaLab 2010 ­ 2014 ­Zürich, Romainmotier, Bangalore and Yogyakarta.

Paula Pin
Spain
Paula Pin is Transhackfeminist performer and researcher. Graduated in Fine Arts from Barcelona and Sao Paolo, Her work ranges from drawing to abstract video to circuit bending to investigations at the frontiers of biology, art and queer science. Her performance piece Medusa from 2010 mixes mythology, ecology and criticism of consumer culture while Udre from 2009, is an automatic drawing machine created from an old umbrella and an Arduino. In 2011 she was awarded a grant from Vida to develop her Photosinthetik Symphony – data from sensors attached to plants and her own body generate sound in a program created in Pure Data. In 2012 she was invited to a residence in Nuvem, a rural art centre in Brasil, to develop her work, focusing especially on photosynthesis. In parallel she creates home made synthesizers, gives workshops, and investigates the practice of noise. The work of Paula Pin blurs the distinctions between machine, animal and plant, and opens up new horizons in the performance of the lab. At present she setup, co-habitats and works with Klau and Julito in the transhackfeminsit hardlab of bio-electro-chemical experimentation, Pechblenda, where they continue generating knowledge and technological autonomy. Across disciplines they wish to enter fully into the matter of a multiple body, be it organic, artificial or fusion of both.

Budi Prakosa
Indonesia
Budi ‘Mas Iyok’ Prakosa is a self-taught programmer, exploring the wide range of possibility in creative coding, he initiated a project as a VJ with the name of manticore in 2009, combining interactive programming with graphic data visualization. He has a background in industrial engineering and have an interest in the field of image and sound processing, video jockey, generative art, machine learning, algorithms, data mining, artificial intelligence and collaboration between science and art. Currently he is working on developing urbancult.net – an online visual mapping documentation on street art, and lifepatch.org a citizen initiative in art, science and technology

Birgit Bachler The project Big Data Wall Fillers is an attempt to make abstract datasets more accessible for domestic use, by processing them into decorative wall paper. The datasets used so far cont... 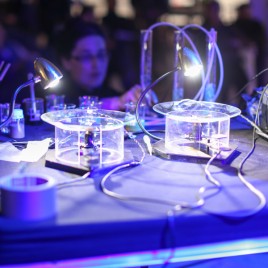