Brain waves are very much subject to fantasy and imagination. Advances in science over the last 50 years have made it possible to read the number of hertz per minute produced by our different areas of the brain and their various modulations depending upon what do you “think”, which part of the brain is active and the level of concentration. Neuroscience or “brain research” is predominantly focused on explaining how the brain works in order to explain how the human works. This last point is more problematic as neuroscience uses a very limited tools to measure of the complexity of the brain; the electrical production the brain produces to map some other reaction in human conscious and/or unconscious decision making, emotion, feeling or affect… . In Thêta Fantomes the aim is not trying to explain brain function but rather hijack these tools and the potential of their sensors to embrace of new conception of mixing game and mix-media live performance. As in Alvin Lucier’s piece “Music for solo performer” where he used his brainwaves to control some drums using EEG sensors in 1965. APO33 collective also proposes with Thêta Fantomes to withdraw the performer from the situation of performing “physically” with the material and instead use his/her brainwaves to control sound production. Thêta Fantomes requires the performer to achieve a certain level of concentration and will ask the audience and the performer to balance their thoughts in order to achieve the ultimate visual and musical composition. Founded in 1997 APO33 ia a notforprofit association/artists collective. APO33 focuses on collaborative working practices; crossing sound, art, philosophy and technology. APO33 is an artists run space for testing and developing projects and artworks by the collective and resident artists. Research and development produced by the association is intentionally “open” and “freely available” for use by the community; artists, programmers, researchers and organisations, as well as to the larger public. 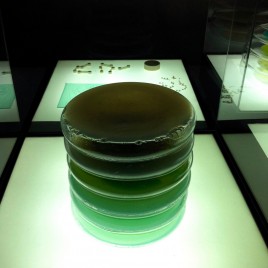 Kelly Jaclynn Andres The Temporary Archive of Ambiguous Architecture (2012-2014), is a series of experiments with rapid prototyping techniques and living fungi. The first part of the archive system...

Erin Sexton, 2014 Between ritual and experiment, phase space is an audio/visual performance wherein I search for emergent sonic phenomena, trans-physical resonance, and distortions in space-time. ...