Ghostradio is a physical mechanism that generates random numbers through chance. Cyber-culture has become problematic for our democratic societies. Instead of using digital technologies for social development, a panopticon powered by supercomputers has been created. Internet communication gets copied for content analysis by spy agencies and corporations. At the moment, information exchanges on the internet are either in plaintext, or they use, for ‘secure’ transmission, encryption.
For cryptograpic methods to be safe it is essential to create a very good random key. Usually these keys are produced by pseudorandom generators. As they are produced by algorithms, they are not really random, and can be outguessed with the help of powerful computers. In order to tackle this issue, the artists have built a ghostradio device that produces real random numbers. Referring to the use of chance in art and to the Second Order cybernetics of Heinz von Förster, Ghostradio depolys feedback and quantum effects to create random numbers from the boundaries of reality and beyond. Ghostradio publishes the resulting random number datastream for the generation of cryptographic keys. This will release the public from the current state of surveillance. Main category: Crypto Field Subversion Fields: cryptography, Second Order Cybernetics, chance art, surveillance studies, quantum fields, string theory, noise, natural phaenomena, theorie of everything.The work is licensed under copyleft artlibre.org/licence/lal/en free art license. Markus Decker
http://www.firstfloor.org/ae
Austria
Works on improvisation, noise and on spatial experimental situations. in the 90ties, he was part of some
net-tech-groups, produced regular netcasts, and ran a small netradiostation together with Joachim
schnaitter, in the framework of the xchange netradio initiative and firstfloor electronix. Markus is
working on collaborative artworks with like-minded computer professionals and artists. the works have
been shown in places such as, blasthaus san francisco, kontejner zagreb, file sao paulo, nomadenetappe
and ars electronica linz, interaccess gallery toronto, etc. he frequently collaborates with dietmar
offenhuber, ushi reiter and servus.at, laura beloff, dilemma- interstellar- records and Richard
herbst, erich berger, among others.

Pamela Neuwirth
http://www.firstfloor.org/ghostradio/
Austria
Lives in linz and works as author, free journalist and radio editor. at the moment she also worksas an undertaker (mortician). during several working-collaborations with artists and writers she currently investigates fascism and architecture (Demant revisited), art-brut and psychiatry (irren-Offensive), and the field of chance and cryptography (ghostradio Project). 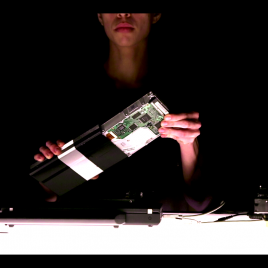 Michaela Lakova DEL?No, wait!REW is an automatized system, which recovers files from hard drives without the consent or the knowledge of the previous owners, who presume their content has been fore... 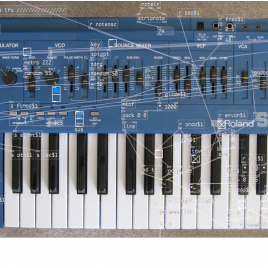 Servando Barreiro In this workshop, among other more advanced things, the attendants are going to learn the basic building blocks of a classic synth. Concretely we are going to study and hack a ...